How to Protect Against Counterfeit Batteries 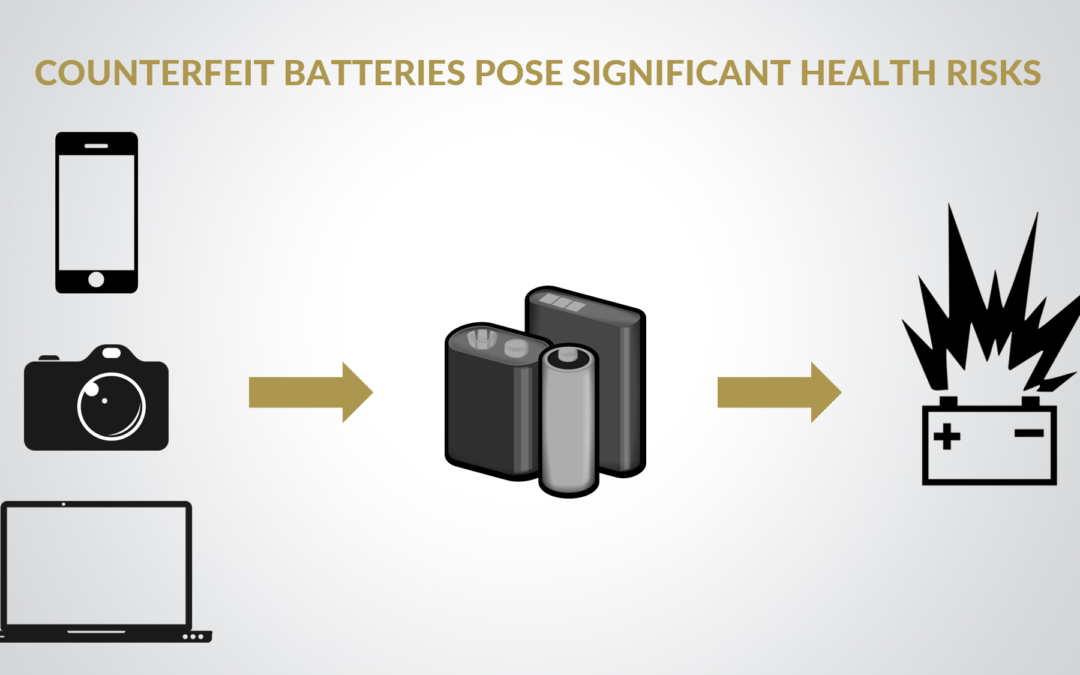 Worldwide, counterfeiting remains a multi-billion dollar enterprise despite widely available anti-counterfeit measures. But the issue at hand is that counterfeit Lithium-ion batteries have flooded the market and the supply chain from the original battery manufacturers all the way to the retailers who unwittingly sell fakes to consumers. Without a doubt, the problem is significant, yet new anti-counterfeit technology protects against illicit batteries. Here’s the lay of the land before we move on to discussing a tangible solution brand owners can deploy to create a more robust anti-counterfeit ecosystem.

The simple fact remains that the counterfeiting of batteries – especially the Lithium-ion variety – is profitable for fraudsters since device manufacturers purchase these items in bulk and embed them inside electronics. A distributor or consumer has no idea that the new smartphone they recently purchased may be dangerous to carry around and use.

A fake battery can enter the value chain at any point, and at a glance, no one knows that the batteries aren’t authentic. The sophisticated technology required to authenticate a battery doesn’t help a consumer who must decide whether or not an item is safe to use based on exterior markings and trademarks. Counterfeit camera batteries are good examples of the scope of the problem since major camera brands like Sony and Canon openly warn about buying counterfeit batteries from unsafe, unreliable sources online.

Not every industry does the same thing, suggesting that the problem is widespread, persistent, and significant. Recently, authorities in the U.S. foiled a conspiracy to manufacture, ship, and distribute counterfeit laptop batteries made in China. Before the law caught up with the con, the operation had already made an estimated $24 million in illegal profits. Unfortunately, those are only a few examples, so what’s the actual risk to consumers? The answers may surprise you if you’re unaware of the dangers of using counterfeit batteries in today’s electronics.

Counterfeit batteries can be dangerous when they malfunction. That’s the bottom line about why consumers need to be vigilant against counterfeit products, especially when purchased online or purchased in bulk at an extraordinarily, really low price. Both are red flags to look for when buying batteries online, even from trustworthy sites like Amazon and eBay.

The health risk is that fake batteries can dangerously overheat. The battery’s capacity rating may not be able to hold the charge and make the battery malfunction too. A Lithium-ion battery embedded in a smartphone is another excellent example since simply charging the device can overheat it. Additionally, the internal composition of the battery is hazardous to the touch, and a defective battery can also damage a device beyond repair if the casing pops open.

Furthermore, a fake battery can deteriorate faster and lose the ability to hold a charge after a short time. The goods may have an inaccurate, blatantly misleading power rating, or they can be genuine battery packs rewrapped and sold as individual cells. This type of fraud requires an element of trademark infringement or making false claims about a battery’s origin for marketing purposes. In this light, how are brand owners currently protecting against counterfeit batteries?

Brand owners try to protect against counterfeit batteries with different degrees of success. No one doubts that the problem of fake batteries is detrimental to public health and safety. Counterfeit batteries absolutely put consumers in danger, so the risk of physical harm demands effective defenses. Otherwise, consumers won’t be able to trust that the items they’re buying are safe and genuine.

Overall, the issue is that current anti-counterfeit measures used for batteries are overt, often printed directly on the battery with varying serial number schemes or other markings, depending on the country of origin and the manufacturer’s quality controls too. For instance, Sony and Canon place hologram stickers on the packaging or the batteries themselves. On the flip side, invisible countermeasures include ultraviolet markings that reveal a product’s authenticity, but counterfeiters still manage to exploit a loose regulatory landscape.

Internationally, no widely accepted standard states what a battery should and shouldn’t stipulate on the outer casing. Laws, indeed, exist about the packaging and safe transportation of sensitive goods like Lithium-ion batteries. Still, the same diligence doesn’t exist at the product level where the actual counterfeiting can take place.

The problem is even more concerning because consumers must decide on their own, without the aid of sophisticated technology, whether or not a battery is genuine. It’s extremely difficult to identify counterfeits by sight alone unless you can take images of the battery’s internal components to spot inconsistencies. Thus, the better solution is to implement covert security that criminals can’t readily replicate to bolster consumer trust.

Without a doubt, the best way to protect against counterfeit batteries is to take the verification step out of the consumer’s hands. Instead, the more efficient solution is to use an application to determine the genuineness before the batteries reach consumers. Ideally, you’d also want to spot fakes throughout the value chain from the moment the item leaves the battery manufacturer’s facility.

The benefits of covert security are significant and worth the effort to create a holistic system that can identify fakes in several ways. That’s one reason why we propose a new way to defend against counterfeiting by making a complete security ecosystem down to the product level. Indeed, building such capabilities is possible when using covert protections developed by AlpVision: AlpVision Fingerprint and Cryptoglyph.

AlpVision Fingerprint, our state-of-the-art solution that can pinpoint fake items at the product level, is a powerful software tool to add to your company’s anti-counterfeit repertoire. The technology relies on spotting the intrinsic defects in the molds for plastic components, a battery in this case. The system then references images to determine whether or not the same inherent microscopic markings exist. If so, the product is genuine.

Furthermore, AlpVision Fingerprint is extraordinarily challenging for counterfeiters to mimic the one-of-a-kind imperfections in a plastic mold. The ransom processes used to create the mold, such as electro-erosion, are extremely difficult to replicate accurately. The tech required to pull off the con is also cost-prohibitive and not publicly available.

In addition to AlpVision Fingerprint, Cryptoglyph works well when securing packaging and labeling for digital verification. Initially, Cryptoglyph worked by punching microscopic holes over the package, but today, the technology can imprint thousands of tiny holes in the varnish layer of labels, certificates, and packaging as well. Fraudsters and counterfeiters won’t be able to duplicate the protection since they have no way to fake the underlying technology. Cryptoglyph is a state-of-the-art solution and very effective at thwarting counterfeits.

Essentially, the technology works by scanning packaging with a smartphone app, and you can even scan reflective materials imprinted with Cryptoglyph. When integrated with the rest of your anti-counterfeit measures, Cryptoglyph affords you the benefit of scaling our defenses at a better price point.

Indeed, Cryptoglyph is a powerful technology that deters counterfeiters, but you can develop an even stronger and more robust system when you create an ecosystem of solutions works at the product level. Both solutions working in tandem will create a strong defense and protect against counterfeit batteries, among other products. When you use multiple security solutions, such as AlpVision Fingerprint and Cryptoglyph, you’ll benefit from a comprehensive, well-rounded anti-counterfeit strategy.

If you’d like to read more about our anti-counterfeit software,

to learn how AlpVision’s solutions can improve your security posture.