How to Spot Fake Baby Formula 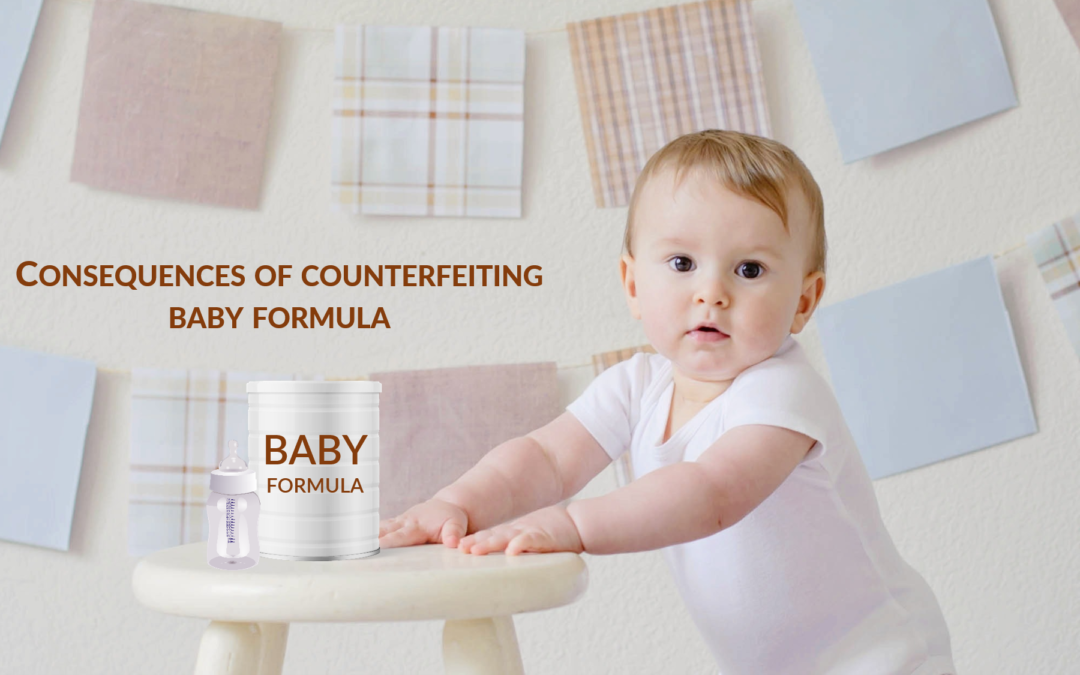 Counterfeiters will try to fake any product, including baby formulas. The moral revulsion against potentially harming infants isn’t there. Instead, fraudsters only care about profits, but brand owners are not helpless.

There are ways to spot fake baby formula before it reaches consumers. Unfortunately, the reality is that a minuscule number of fraudulent goods will make it through and eventually land on store shelves, looking very much like a facsimile of the authentic product. The challenge for brands is preventing counterfeits before they enter illegitimate distribution channels because once an item is diverted, it’s already too late. But brands can set up an ecosystem of protections and anti-counterfeit safeguards to keep that from happening in the first place.

Why do babies need infant formula and powdered milk?

Not every mother can feed their infants naturally, so baby formula and powdered milk give them a way to ensure the infant receives the proper nutrition during the first few years. The reasons a baby might need to take powdered formula from a bottle vary from child to child. For instance, children may not tolerate the mother’s milk, or the mother may not be able to produce enough milk to feed the child properly. In either case, baby formula is vital to the infant’s health and well-being. Without it, babies won’t receive the proper nutrients they need to grow, raising the risk of adverse health outcomes throughout the child’s life.

As such, the baby formula shortage in 2022 triggered a dire situation in the U.S., where parents had trouble finding legitimate powdered milk. The problem stemmed from the U.S. Food and Drug Administration (FDA) closing down a key Abbott formula manufacturing site. The idea was to cease production temporarily to ensure that retailers only carry safe products, but the unintended consequence was a sudden shortage of essential baby food.

Parents scrambled to find alternatives, and at the time of this writing, the shortage was waning but not entirely over. Unfortunately, this situation raises the risk that counterfeiters will try to ply their criminal trade and produce fake baby formula. If that happens, the damage can be widespread, so here’s a look at the consequences of fraudulent powdered milk sold online.

At worst, the consequences of counterfeiting infant formula can lead to a child’s death. Children harmed by fake formulas suffer the most, but there are damages to the milk manufacturer too. The damage may include:

The truth is that all of these consequences can severely damage a company’s brand, which ultimately affects the bottom line.

Once consumers believe a brand doesn’t care about infant safety, the inevitable result is fewer sales and less legitimacy in the market. If children become ill en masse, it will be incredibly challenging for any company to remediate the situation since incidents like this can become international headlines in days, if not hours. The only outcome is damage to a brand’s reputation.

Since baby products are crucial to child development, brands need parents to trust that eating the company’s food is safe, especially if purchased online. As soon as an incident becomes public knowledge, consumers may immediately stop buying the product if a regulatory agency like the FDA sounds the alarm. Infants may have already fallen ill by that time, which can lead to significant lawsuits.

Even if a company may eventually be vindicated of liability, the cost of defending against a high-profile lawsuit can be high. The business may have to take a settlement offer to handle the legal side of the equation because brands are responsible for the products they create. If the item is an overrun, the company can be found to be negligent in quality control and pay a huge settlement.

Lastly, we come to the worst possible outcome: injury or death. The reality is that infants have passed away after consuming the contaminated formula. Aside from death, fake milk can trigger an allergic reaction in children who cannot tolerate certain nutrients. Some children have difficulty digesting proteins, which is why substitutes are crucial. If the child takes in too much fake milk, they may develop health problems that require emergency care.

Mainly, authorities have identified counterfeit powdered milk in intentionally mislabeled products. The mystery is how these products enter legitimate distribution channels in the first place because these items were diverted at some point along the supply chain. It can happen at the manufacturing facility or during the chain of custody exchanges, but criminals can attempt the con at any point in the supply chain.

Diverted products can have altered serial numbers on the bottles or the packaging, so the supplier is unwittingly transporting counterfeits. At a glance, the item looks real because the label is mostly genuine. Still, another strategy counterfeiters can try is re-labeling milk that is past its due date or completely spoiled in some cases. They change the dating to look as if the product is still good, but in reality, it’s nearly rotten.

There’s also the possibility that the entire bottle may be fake, with risky ingredients like melamine adulterating the goods.

Which parts of the world have the most problems with counterfeit infant formula?

An incident in the Chinese market highlights the risk of fake powdered milk. At least 50 children passed away in 2008 due to poor nutrition. Allegedly, hundreds of thousands of babies in China fell ill after developing ailments like kidney stones. The food had little to no nutritional value and contained melamine, which caused the defects. Eventually, authorities revealed as many as 36 different phony brands that had entered the Chinese market. As such, China remains a significant source of fake infant formula, although incidents have also occurred in the States.

As far back as 1995, U.S. law enforcement identified fake formulas on store shelves, indicating that the con has been ongoing for decades. Today, counterfeiters have likely switched their tactics and techniques to remain undetected and make counterfeit labels on metal shipping containers or folding boxes, making it harder to spot the fakes.

The good news is that brands can safeguard those types of packaging with invisible protections, such as AlpVision Cryptoglyph.

Cryptoglyph excels at securing packaging and labeling for digital verification. The initial rollout of Cryptoglyph worked by imprinting microscopic holes over the whole package, but nowadays, the solution can punch thousands of microscopic holes in the varnish layer of labels, certificates, and boxes. Criminals won’t be able to duplicate the Cryptoglyph because they have no means to counterfeit the underlying technology. Indeed, Cryptoglyph is a powerful, versatile solution and a vital part of an anti-counterfeit ecosystem.

Essentially, the solution works by scanning boxes or packaging with a smartphone app, and it will also scan reflective surfaces imprinted with Cryptoglyph. When integrated with other anti-counterfeit measures, Cryptoglyph affords you the opportunity to scale defenses at a better value. Cryptoglyph is a bleeding edge technology that thwarts counterfeiters. Still, you can develop an even stronger and more robust system when you create a holistic approach, including protection for infant milk.

If you’d like to read more about our anti-counterfeit solutions, contact us  to see how AlpVision’s tech can bolster your security posture.